Every day is women’s day.

This day was celebrated for the first time by the United Nations in 1975. The General Assembly adopted a resolution proclaiming a United Nations Day for Women’s Rights and International Peace to be remarked on any day of the year by Member States.

Obsession is, the domination of one’s thoughts or impressions by a persistent idea, image, or desire. Since I met with Mohtarma Benazir Bhutto, I am obsessed with her fearlessness, her vision for democracy, her views on human rights and freedom of speech. Today Pakistan is celebrating the International Women’s day, I would like to share not a pleasant incident, but it is linked to her bravery.

She accused the province’s home affairs adviser, Irfanullah Marwat, a son-in-law of the then President Ghulam Ishaq Khan, of having ordered the violation. She claimed the rape was politically motivated because of her friendship with Mohtarma Benazir Bhutto. There were two other cases set out the limelight because of Farhana Hayat’s case, Khursheed Begum and Rahila Tiwana, a Pakistan Peoples Party student activist. All three women were connected with PPP.

She was raped to send me a message. This is the worst sort of male prejudice, male chauvinism to send a message to a woman political leader by raping her friend, her supporters: Benazir Bhutto

Benazir Bhutto led her Pakistan People’s Party, chanting “Fascists,” in an unprecedented walkout from President Ghulam Ishaq Khan’s ceremonial address to a session of Parliament. Firing tear-gas canisters and swinging batons, police later drove 2,000 Bhutto supporters away from the heavily guarded Parliament House. Ghulam Ishaq Khan denied any official complicity. He told the reporters that the charges against Irfan Ullah Marwat are nothing more than fabrication.

Initially, the Sindh. The government tried to sink off the case as one of audacity and assault. The police even refused to lodge an FIR. Benazir Bhutto, along with several political parties and women’s organizations, established a countrywide campaign demanding the arrest of the offenders but no arrests were made. Protests over the rape of Farhana Hayat reached a peak on 12 December 1991 when rallies were called in Islamabad, Peshawar, Lahore and Karachi

Mr Irfan ullah Marwat remained highly controversial during the term of office of all powerful Sindh Chief ministers, the late Jam Sadiq Ali. The two, along with the former DIG CIA, Samiullah Marwat, were blamed by Benazir Bhutto for unleashing a reign of terror on the PPP leaders and workers, which reminded her of the days of the late General Ziaul Haq.

Mr Irfan Ullah Marwat, who was elected from the PS-114 constituency on the Pakistan Muslim League-Nawaz’s (PML-N) ticket, met Ex-President Asif Ali Zardari on 24TH February 2017 at the Bilawal House and announced joining the party. I just got blanked when I heard this news, couldn’t understand how to respond.

While I was in shock BB’s daughter came to the deliverance; 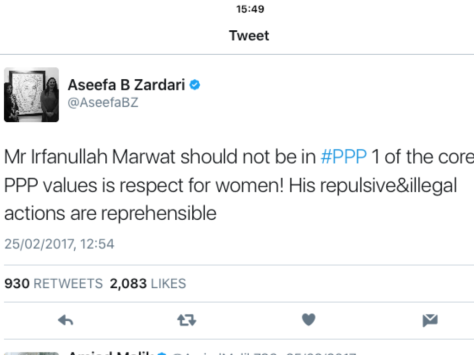 All faiths and all societies have given parents an honourable status. From a purely material standpoint, we find ourselves indebted to our parents, I am sure it must have been very difficult for Miss Bakhtawar Bhutto and Aseefa Bhutto to show their disagreement publicly, but it was the training of their brave mother who taught her children how to show your disagreement without being rude. Our indebtedness to our parents is so immense that it is not possible to repay it in full. Bakhtawar Bhutto and Aseefa Bhutto you are an inspiration for millions this year and years to come. I hope you always will stand strong for the women of Pakistan.

Blasphemy, freedom of speech, rule of law; these are the familiar topics in discussion these days. I was thinking to write my thoughts on these topics. Hence, I had to think twice, even to think about such topics because there is no room left for tolerance. Fatwas are already set up as soon as you give your opinion about anything which is not acceptable to any other sect.
I would wish to present some excerpts from a dialogue I read years ago in Urdu, recently I have discovered the English version which was originally translated from French to Persian. A dialogue between Ja’far as Sadiq (702-765 CE) was the 6th Imam Of twelve Shias and according to some traditions a teacher of Imam Abu Hanifa, Imam Malik, Wasil Ibn Ata and many more including Jabir Ibn Hayan the alchemist. I would like to request my readers to keep the time of this discussion in mind before I present you more on the subject of blasphemy and other related issues.

Take the seeds of ten kinds of herbs and put them in a closed jar, which has sufficient water, but no air. Would they germinate? No, in addition to water, seeds need air also. It is possible to grow grass, herbs and fruits in hot houses, when it is very cold, provided there is sufficient air. Without the presence of air no grass will grow in the fields. If there is no air, all plants and animals, including human beings, would die.
Do you see the air, on which your very existence depends. You only feel it when it moves. Can you refuse to believe in the existence of air? Can you deny that to grow and get green the grass needs many things like seeds, soil, water, air, a suitable climate and above all a strong managing power, which may co-ordinate the action of these different elements.
It is not because of one’s knowledge, but it is due to his ignorance that he does not believe in Allah. When a wise man thinks of himself, he finds that his own body needs a controller so that all its organs and systems may function properly. He then realises that this vast universe also needs a controller or supervisor so that it may run smoothly.
Do you think that the mountains are only heaps of stones? The Great Allah has created them to serve some very useful purpose. They were not created so that you may take stones and turn them into idols. Wherever there is a mountain there is flowing water. Rain and snow which fall on the mountain tops produce streams of fresh water. These streams combine together to form big rivers, which irrigate farms and fields.
I am too small and too weak to create Allah with my brain. It is He, who has created my brain, so that I may think of Him and know Him – my Creator. He was there before I came into being and He would be there when I am no more. I do not mean that I would be totally destroyed. Nothing in the universe is totally destroyed. Everything is subject to change. It is only Allah, Who does not change.
Abu Shakir said: I cannot believe that a thing may be everywhere but remain unseen.
Ja’far as Sadiq said: Do you know that the air is everywhere but cannot be seen?
Said Abu Shakir: Although I cannot see the air, I can at least feel it when it moves. But I can neither see your Allah nor feel his presence.
Ja’far as Sadiq said: You do not feel the presence of air when it is not moving. The air is only a creation of Allah. He is everywhere, but you cannot see Him or feel His presence by your senses. You have admitted just now that although you do not see it, but your instinct or your soul tells you that there is something inside the stone, and is not the stone, which can help you. That something is Allah.
I know that you will not accept, or perhaps you do not understand, what I say. A man must have sufficient knowledge to understand complicated problems.
If there was no Allah there would have been no universe and no you and me.
The sentence, “There is no Allah”, is meaningless. The existence of Allah is a must.”
Everything in the universe obeys His laws, which are permanent and eternal. Because of His absolute wisdom and knowledge, He could make such wonderful laws, which will last for ever. Each and every law, made by Him serves some special and useful purpose.
Ja’far as Sadiq asked: Do you now believe that Allah, who cannot be seen, does exist and what you worship is the unseen Allah?
Abu Shakir replied: I am not yet convinced. I am in a quandary. I am full of doubts and misgivings about my convictions.
The above discussion will make me more comfortable to explain my views on blasphemy in my next write up .