Towering minarets against deep blue skies immediately spring to my mind whenever I think of Marrakech, known as the Red City thanks to the vividness of distinctive hue of the thick walls surrounding the old city. For decades Marrakech has been a popular tourist destination, attracting everyone from the Beatles to Yves Saint Laurent.

Vigorous and bustling Jemaa el Fnaa is a whirlwind of colour and noise, where concourse of people braid between packed stalls exhibiting brightly coloured spices, dry fruits and a thousand other goods, in the evening the square is packed with fire-eaters, acrobats, astrologers, and other characters of street entertainers.

Only a 20 minute walk from the Jemaa el Fnaa is one of the most evocative places in Marrakech, a tranquil garden Jardin Majorelle. As I enter the garden it seems hard to believe that only half an hour ago I was walking through the bustling crowds of Jemaa El Fnaa square. Inside the Majorelle gardens the atmosphere is totally tranquil, sky high bamboos, palm trees and the complex arrangement of cacti and flora has left me in an overwhelming feeling of reverence. The flows and pools filled with water lilies and lotus flowers, delicate sound of dribbling water accompanies the song of the nightingale in the gardens, the rustling of leaves and the chirping of numerous exotic birds who come here to take refuge. 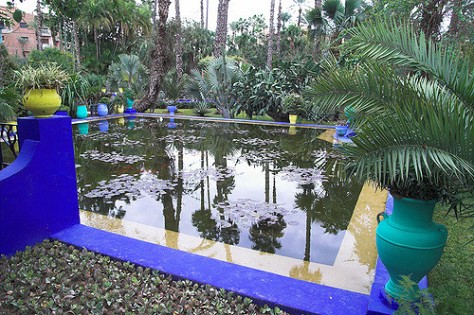 Set up by the expatriate French painter Jacques Majorelle in 1920s.The son of well-known furniture designer Louis Majorelle, was born in 1886 in Nancy. After studying art in Paris, Majorelle visited Morocco, whose colours and light mesmerized him. Moving to Marrakech in 1919 with his wife, he bought four acres of land in 1923 where he built his Moorish-style villa. His greatest art work is supposed to be the Majorelle Garden, which he created in 1924. A special colour of blue, which he practiced extensively in the garden, is named after him – Majorelle Blue. During his travels, he brought home plants from all over the world, corresponded with fellow passionate gardeners worldwide, and amassed a total of 10 acres to have more distance. It took him forty years of love and dedication to create the enchanting garden in the heart of the Marrakech. The more he travelled, the more he enjoyed gardening, he began to bring plants from around the globe and to communicate internationally with people who shared his passion for botany. He took on hundreds of rare varieties of trees and plants.

Majorelle opened it to the public in 1947. Sadly, after his 1956 divorce, he was pressured to sell off the property piece by piece. After a serious car accident, he went for medical treatment in the last year of his life to Paris, where he died in 1962. The garden was deserted after his death.

Saint Laurent increased its number of plant species to 300 from 135, and installed automatic irrigation systems pegged to certain times and the demands of each plant. He and Berge lived in the villa, renamed Villa Oasis, which they decorated as an Orientalist fantasy, and turned Majorelle’s studio into a museum of Islamic artwork.

Saint-Laurent praised the garden as a “constant source of divine guidance,” saying he even dreamed about its vibrant colours. We were seduced by this oasis where the colours of Matisse were mixed with those of nature. 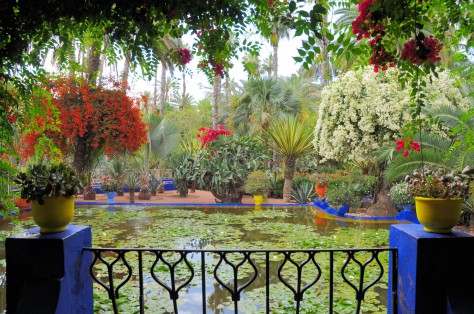 One thought on “Majorelle Marrakech”