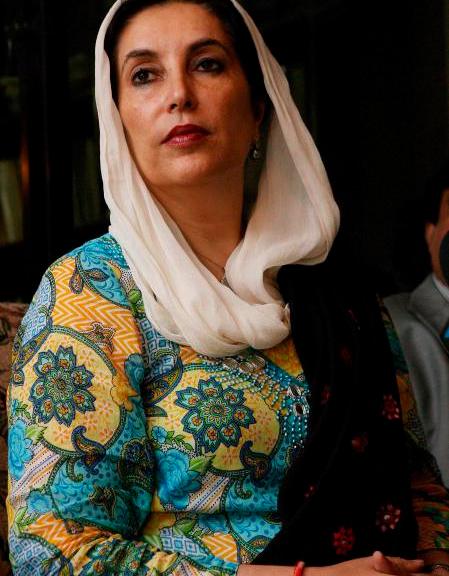 Benazir Bhutto was one of the most charismatic leaders that Pakistan’s  politics had produced. Since her return home in 2007, she had been the target of at least three assassination attempts by elements linked to al Qaeda and the Taliban. She staged a series of mass meetings across Pakistan. She did that despite her aides  appeals for caution in the wake of a double suicide bombing that narrowly failed to kill her on the night of her return from exile in October 2007 which killed more than 130 people.

“We will continue to meet the public,” she said as she visited survivors of the bombings at a Karachi hospital. “We will not be deterred.” One cannot take part in democratic life from behind walls,I am not like bin Laden or Mullah Omar, to run and hide in a cave. I have to be with my people.

She  was one courageous ,secular and liberal women leader Pakistan will always be proud of,a daughter who knew the tribulations of cloistered confinement, a sister who outshone her brothers by carrying forward her father’s legacy,a young bride who supported her husband , a mother who did not let pregnancy get in the way of politics, an leader  who could easily move with her people regardless of their race, religion, gender  or status.

In 1988 she became the most powerful symbol in contemporary politics for women,as she became the first elected female head of the State in Muslim World.She exemplified  the normalisation of women in politics and immediately countered invisibility of women heightened under Zia’s military rule. She lifted press censorship.

When I met Mohtarmah Benazir Bhutto in December 1989 just a month before Bakhtawar’s birth she was coming back from Multan after monitoring Military excerci ses, I asked her why is she soft on Pakistani print media (in Zia’s regime newspapers were just pro-Zia while in her times it was totally opposite) ,she replied;

This is because of the suppression of 11 years of brutal military rule ,let them take out their frustration , this is the difference between democracy and dictatorship , we are here to strengthen democracy.

She left me speechless but in another interview she confessed ;

I can deal with political differences, but how do you deal with it when someone says I don’t like you because you’re a WOMEN and you have taken a man’s place. I found that my opponents reduced themselves to verbal abuse rather than discuss issues. My identity comes ultimately from being a women and I felt that my life has to make a difference to the lives of other women. I was brought up to believe that a women can do anything that a man can.

The Muslim extremists  not ( Islamists ) killed Benazir Bhutto. But they shouldn’t be allowed to kill Pakistan’s hopes for democracy. In her willingness to meet a violent  death,she may give courage to other women and convince them that its worth risking their lives for the future generation.

June is the month of Mohtarma Benazir Bhutto’s birthday ,may I request you all to celebrate her  by celebrating what she said in December 1988 ;